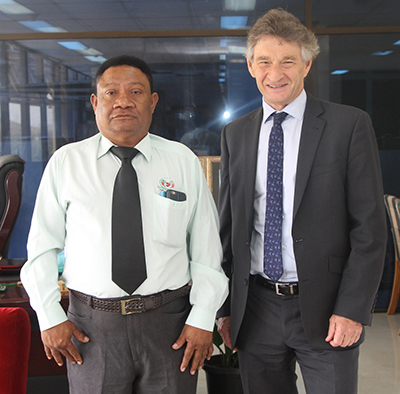 Mr. McPhee said both organizations have important roles to play in their respective countries as citizens rely on them to effectively carry out their audit functions.

He said, the relationship between the Australian Audit office and the PNG Audit Office goes back a long way. The ANAO is committed to see this relationship continue to progress and are happy to share their experiences and skills with the PNG AGO.

PNG Auditor-General, Mr. Philip Nauga described the meeting as being beneficial towards strengthening the ongoing relationship between the two organizations.

Mr Nauga said: “The reason he (Mr. McPhee) came, is to look at how to improve the relationship and make it stronger.

Our relationship is based on a number of factors, one of which is the current twinning program in place where we send our staff to Australia on work attachment and training and they in turn send their staff to PNG for a period of time. We therefore need to work out whether this type of program needs modification and so forth. We had this discussion and it was very fruitful.

This type of visit enables each one of us to develop an in-depth understanding of our needs so we can tailor assistance to these specific needs.

Mr. McPhee met with Mr. Nauga and members of his staff at the PNG Auditor General’s Office in Waigani, including Mr. Wayne Jones and Ms. Nicola Rowe, both members of his staff from the Australian National Audit Office (ANAO) – Canberra, currently attached to the PNG Auditor General’s Office. He was accompanied on this trip by his External Relations Officer Ms. Tamie Plant.